This post recommends calling pygame.display.flip from a thread, which I tested extensively on mac, windows, and linux before posting, but after some feedback from readers, I realize that this strategy is not in fact cross-platform; specifically, the nvidia drivers on linux appear to either crash or display a black window if you try to do this. The SDL FAQ does say that you can’t call “video functions” from multiple threads, and flip does do that under the hood. I do plan to update this post again, either with a method to make it safe, or a method to use slightly more complex timing heuristics to accomplish the same thing. In the meanwhile, please be aware that this may cause portability problems for your code.

I’ve written about this before, but in that context I was writing mainly about frame-rate independence, and only gave a brief mention of vertical sync; the title also mentioned Twisted, and upon re-reading it I realized that many folks who might get a lot of use out of its technique would not have bothered to read it, just because I made it sound like an aside in the context of an animation technique in a game that already wanted to use Twisted for some reason, rather than a comprehensive best practice. Now that Pygame 2.0 is out, though, and the vsync=1 flag is more reliably available to everyone, I thought it would be worth revisiting.

Per the many tutorials out there, including the official one, most Pygame mainloops look like this:

Obviously that works okay, or folks wouldn’t do it, but it can give an impression of a certain lack of polish for most beginner Pygame games.

The thing that’s always bothered me personally about this idiom is: where does the networking go? After spending many years trying to popularize event loops in Python, I’m sad to see people implementing loops over and over again that have no way to get networking, or threads, or timers scheduled in a standard way so that libraries could be written without the application needing to manually call them every frame.

But, who cares how I feel about it? Lots of games don’t have networking1. There are more general problems with it. Specifically, it is likely to:

Why should anyone care about power when they’re making a video game? Aren’t games supposed to just gobble up CPUs and GPUs for breakfast, burning up as much power as they need for the most gamer experience possible?

Chances are, if you’re making a game that you expect anyone that you don’t personally know to play, they’re going to be playing it on a laptop2. Pygame might have a reputation for being “slow”, but for a simple 2D game with only a few sprites, Python can easily render several thousand frames per second. Even the fastest display in the world can only refresh at 360Hz3. That’s less than one thousand frames per second. The average laptop display is going to be more like 60Hz, or — if you’re lucky — maybe 120. By rendering thousands of frames that the user never even sees, you warm up their CPU uncomfortably4, and you waste 10x (or more) of their battery doing useless work.

At some point your game might have enough stuff going on that it will run the CPU at full tilt, and if it does, that’s probably fine; at least then you’ll be using up that heat and battery life in order to make their computer do something useful. But even if it is, it’s probably not doing that all of the time, and battery is definitely a use-over-time sort of problem.

If you’re rendering directly to the screen without regard for vsync, your players are going to experience Screen Tearing, where the screen is in the middle of updating while you’re in the middle of drawing to it. This looks especially bad if your game is panning over a background, which is a very likely scenario for the usual genre of 2D Pygame game.

How to fix it?

Pygame lets you turn on VSync, and in Pygame 2, you can do this simply by passing the pygame.SCALED flag and the vsync=1 argument to set_mode().

Now your game will have silky smooth animations and scrolling5! Solved!

But... if the fix is so simple, why doesn’t everybody — including, notably, the official documentation — recommend doing this?

The solution creates another problem: pygame.display.flip may now block until the next display refresh, which may be many milliseconds.

Even worse: note the word “may”. Unfortunately, behavior of vsync is quite inconsistent between platforms and drivers, so for a properly cross-platform game it may be necessary to allow the user to select a frame rate and wait on an asyncio.sleep than running flip in a thread. Using the techniques from the answers to this stack overflow answer you can establish a reasonable heuristic for the refresh rate of the relevant display, but if adding those libraries and writing that code is too complex, “60” is probably a good enough value to start with, even if the user’s monitor can go a little faster. This might save a little power even in the case where you can rely on flip to tell you when the monitor is actually ready again; if your game can only reliably render 60FPS anyway because there’s too much Python game logic going on to consistently go faster, it’s better to achieve a consistent but lower framerate than to be faster but inconsistent.

The potential for blocking needs to be dealt with though, and it has several knock-on effects.

For one thing, it makes my “where do you put the networking” problem even worse: most networking frameworks expect to be able to send more than one packet every 16 milliseconds.

More pressingly for most Pygame users, however, it creates a minor performance headache. You now spend a bunch of time blocked in the now-blocking flip call, wasting precious milliseconds that you could be using to do stuff unrelated to drawing, like handling user input, updating animations, running AI, and so on.

The problem is that your Pygame mainloop has 3 jobs:

What you want to do to ensure the smoothest possible frame rate is to draw everything as fast as you possibly can at the beginning of the frame and then call flip immediately to be sure that the graphics have been delivered to the screen and they don’t have to wait until the next screen-refresh. However, this is at odds with the need to get as much done as possible before you call flip and possibly block for 1/60th of a second.

So either you put off calling flip, potentially risking a dropped frame if your AI is a little slow, or you call flip too eagerly and waste a bunch of time waiting around for the display to refresh. This is especially true of things like animations, which you can’t update before drawing, because you have to draw this frame before you worry about the next one, but waiting until after flip wastes valuable time; by the time you are starting your next frame draw, you possibly have other code which now needs to run, and you’re racing to get it done before that next flip call.

Now, if your Python game logic is actually saturating your CPU — which is not hard to do — you’ll drop frames no matter what. But there are a lot of marginal cases where you’ve mostly got enough CPU to do what you need to without dropping frames, and it can be a lot of overhead to constantly check the clock to see if you have enough frame budget left to do one more work item before the frame deadline - or, for that matter, to maintain a workable heuristic for exactly when that frame deadline will be.

The technique to avoid these problems is deceptively simple, and in fact it was covered with the deferToThread trick presented in my earlier post. But again, we’re not here to talk about Twisted. So let’s do this the no-additional-dependencies, stdlib-only way, with asyncio:

Go Forth and Loop Better

At some point I will probably release my own wrapper library6 which does something similar to this, but I really wanted to present this as a technique rather than as some packaged-up code to use, since do-it-yourself mainloops, and keeping dependencies to a minimum, are such staples of Pygame community culture.

As you can see, this technique is only a few lines longer than the standard recipe for a Pygame main loop, but you now have access to a ton of additional functionality:

I really hope that this sees broader adoption so that the description “indie game made in Python” will no longer imply “runs hot and tears a lot when the screen is panning”. I’m also definitely curious to hear from readers, so please let me know if you end up using this technique to good effect!7

Nice Animations with Twisted and PyGame 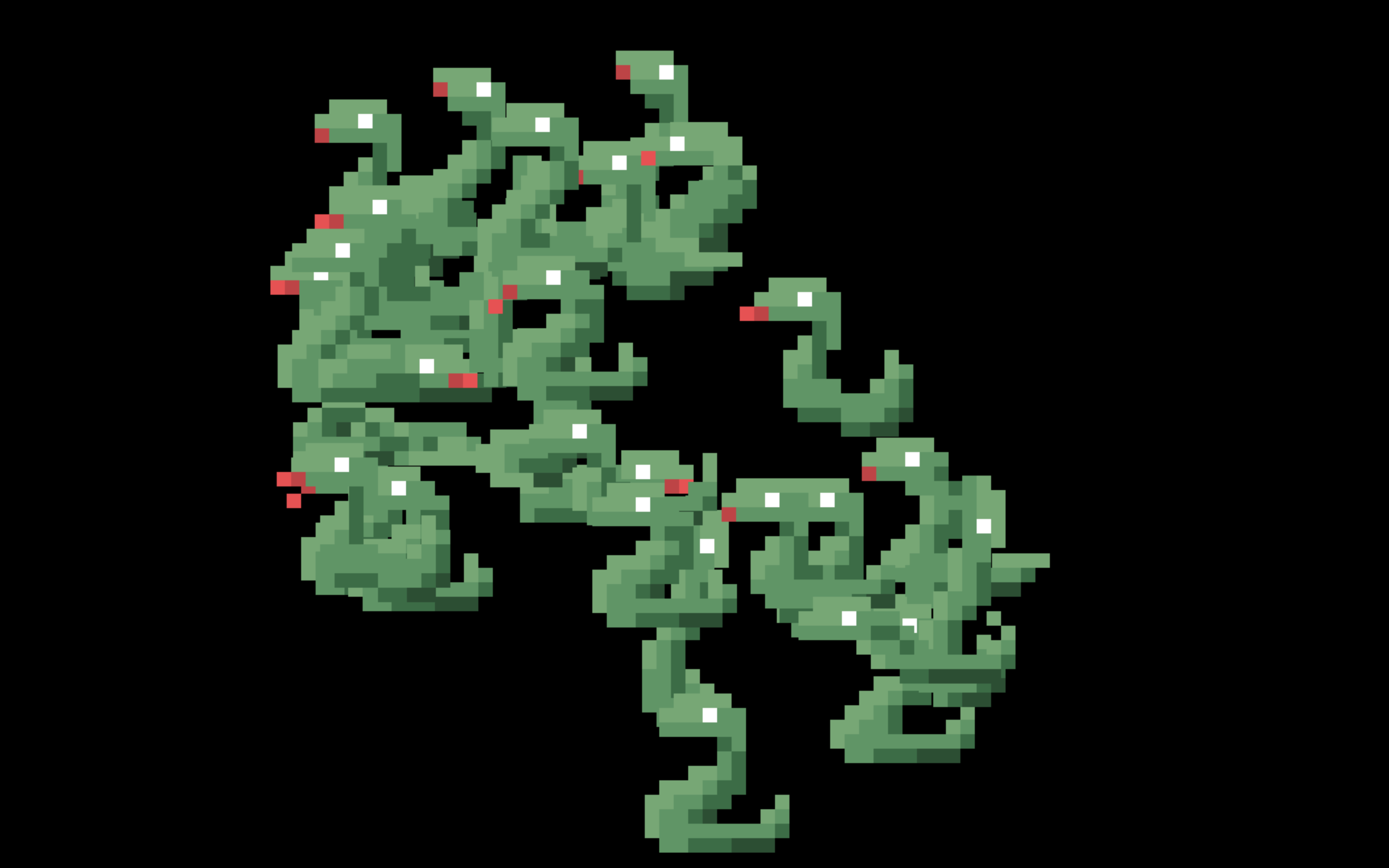 One of my favorite features within Twisted — but also one of the least known — is LoopingCall.withCount, which can be used in applications where you have some real-time thing happening, which needs to keep happening at a smooth rate regardless of any concurrent activity or pauses in the main loop. Originally designed for playing audio samples from a softphone without introducing a desync delay over time, it can also be used to play animations while keeping track of their appropriate frame.

LoopingCall is all around a fun tool to build little game features with. I’ve built a quick little demo to showcase some discoveries I’ve made over a few years of small hobby projects (none of which are ready for an open-source release) over here: DrawSnek.

This little demo responds to 3 key-presses:

Unfortunately a fully-functioning demo is a bit lengthy to go over line by line in a blog post, so I’ll just focus on a couple of important features for stutter- and tearing-resistant animation & drawing with PyGame & Twisted.

For starters, you’ll want to use a very recent prerelease of PyGame 2, which recently added support for vertical sync even without OpenGL mode; then, pass the vsync=1 argument to set_mode:

To allow for as much wall-clock time as possible to handle non-drawing work, such as AI and input handling, I also use this trick:

By deferring pygame.display.flip to a thread1, the main loop can continue processing AI timers, animation, network input, and user input while blocking and waiting for the vertical blank. Since the time-to-vblank can easily be up to 1/120th of a second, this is a significant amount of time! We know that the draw won’t overlap with flip, because LoopingCall respects Deferreds returned from its callable and won’t re-invoke you until the Deferred fires.

Drawing doesn’t use withCount, because it just needs to repeat about once every refresh interval (on most displays, about 1/60th of a second); the vblank timing is what makes sure it lines up.

We move the index forward by however many frames it’s been, then be sure it wraps around by modding it by the number of frames.

Rather than moving based on the number of times we’ve been called, which can result in slowed-down movement when the framerate isn’t keeping up, we jump forward by however many frames we should have been called at this point in time.

One of these days, maybe I’ll make an actual game, but in the meanwhile I hope you all enjoy playing with these fun little basic techniques for using Twisted in your game engine.

© Glyph 2022; All Rights Reserved Excepting Those Which Are Not.
See my disclosure statements for information on my interests, financial and otherwise.
Mastodon