I need to see all the way to the end of time to make progress today.

Sometimes, sea sickness is caused by a sort of confusion. Your inner ear can feel the motion of the world around it, but because it can’t see the outside world, it can’t reconcile its visual input with its proprioceptive input, and the result is nausea. 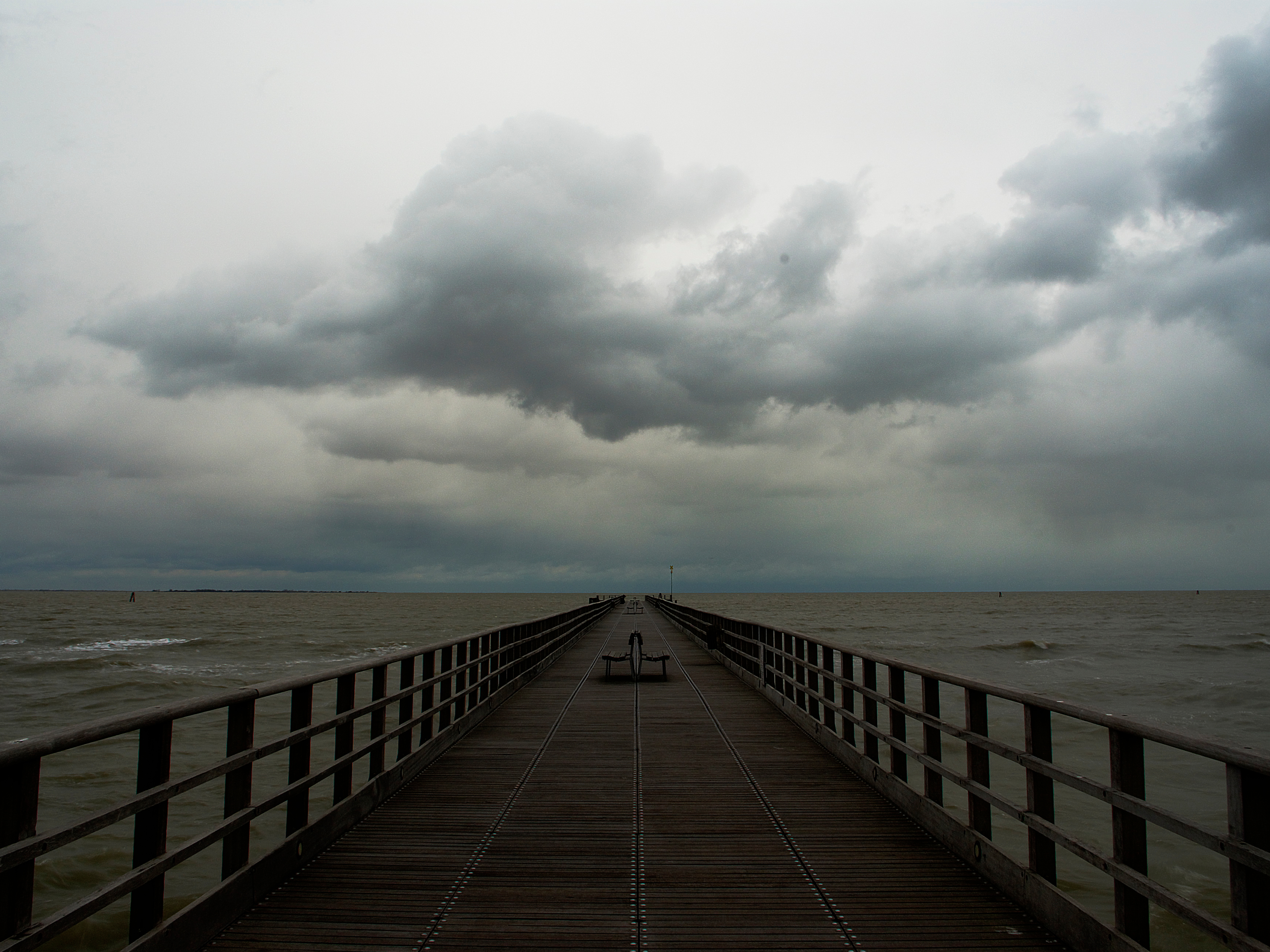 I think I’m going to need to explain that a bit, since I don’t mean the end of the current fiscal quarter. I realize this doesn’t make sense yet. I hope it will, after a bit of an explanation. Please bear with me.

Time management gurus often advise that it is “good” to break up large, daunting tasks into small, achievable chunks. Similarly, one has to schedule one’s day into dedicated portions of time where one can concentrate on specific tasks. This appears to be common sense. The most common enemy of productivity is procrastination. Procrastination happens when you are working on the wrong thing instead of the right thing. If you consciously and explicitly allocate time to the right thing, then chances are you will work on the right thing. Problem solved, right?

Except, that’s not quite how work, especially creative work, works. 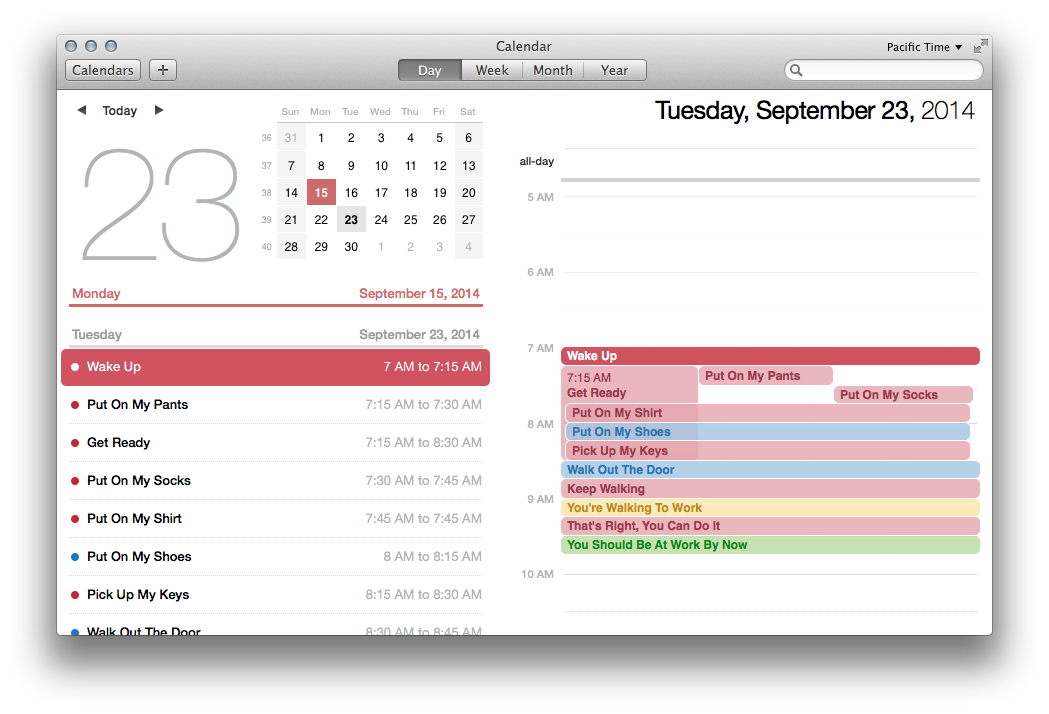 I try to be “good”. I try to classify all of my tasks. I put time on my calendar to get them done. I live inside little boxes of time that tell me what I need to do next. Sometimes, it even works. But more often than not, the little box on my calendar feels like a little cage. I am inexplicably, involuntarily, haunted by disruptive visions of the future that happen when that box ends.

Let me give you an example.

Let’s say it’s 9AM Monday morning and I have just arrived at work. I can see that at 2:30PM, I have a brief tax-related appointment. The hypothetical person doing my hypothetical taxes has an office that is a 25 minute hypothetical walk away, so I will need to leave work at 2PM sharp in order to get there on time. The appointment will last only 15 minutes, since I just need to sign some papers, and then I will return to work. With a 25 minute return trip, I should be back in the office well before 4, leaving me plenty of time to deal with any peripheral tasks before I need to leave at 5:30. Aside from an hour break at noon for lunch, I anticipate no other distractions during the day, so I have a solid 3 hour chunk to focus on my current project in the morning, an hour from 1 to 2, and an hour and a half from 4 to 5:30. Not an ideal day, certainly, but I have plenty of time to get work done.

The problem is, as I sit down in front of my nice, clean, empty text editor to sketch out my excellent programming ideas with that 3-hour chunk of time, I will immediately start thinking about how annoyed I am that I’m going to get interrupted in 5 and a half hours. It consumes my thoughts. It annoys me. I unconsciously attempt to soothe myself by checking email and getting to a nice, refreshing inbox zero. Now it’s 9:45. Well, at least my email is done. Time to really get to work. But now I only have 2 hours and 15 minutes, which is not as nice of an uninterrupted chunk of time for a deep coding task. Now I’m even more annoyed. I glare at the empty window on my screen. It glares back. I spend 20 useless minutes doing this, then take a 10-minute coffee break to try to re-set and focus on the problem, and not this silly tax meeting. Why couldn’t they just mail me the documents? Now it’s 10:15, and I still haven’t gotten anything done.

By 10:45, I manage to crank out a couple of lines of code, but the fact that I’m going to be wasting a whole hour with all that walking there and walking back just gnaws at me, and I’m slogging through individual test-cases, mechanically filling docstrings for the new API and for the tests, and not really able to synthesize a coherent, holistic solution to the overall problem I’m working on. Oh well. It feels like progress, albeit slow, and some days you just have to play through the pain. I struggle until 11:30 at which point I notice that since I haven’t been able to really think about the big picture, most of the test cases I’ve written are going to be invalidated by an API change I need to make, so almost all of the morning’s work is useless. Damn it, it’s 2014, I should be able to just fill out the forms online or something, having to physically carry an envelope with paper in it ten blocks is just ridiculous. Maybe I could get my falcon to deliver it for me.

It’s 11:45 now, so I’m not going to get anything useful done before lunch. I listlessly click on stuff on my screen and try to relax by thinking about my totally rad falcon until it’s time to go. As I get up, I glance at my phone and see the reminder for the tax appointment.

The appointment has today’s date, but the subject says “2013”. This was just some mistaken data-entry in my calendar from last year! I don’t have an appointment today! I have nowhere to be all afternoon.

For pointless anxiety over this fake chore which never even actually happened, a real morning was ruined. Well, a hypothetical real morning; I have never actually needed to interrupt a work day to walk anywhere to sign tax paperwork. But you get the idea.

To a lesser extent, upcoming events later in the week, month, or even year bother me. But the worst is when I know that I have only 45 minutes to get into a task, and I have another task booked up right against it. All this trying to get organized, all this carving out uninterrupted time on my calendar, all of this trying to manage all of my creative energies and marshal them at specific times for specific tasks, annihilates itself when I start thinking about how I am eventually going to have to stop working on the seemingly endless, sprawling problem set before me.

The horizon I need to see is the infinite time available before me to do all the thinking I need to do to solve whatever problem has been set before me. If I want to write a paragraph of an essay, I need to see enough time to write the whole thing.

Sometimes - maybe even, if I’m lucky, increasingly frequently - I manage to fool myself. I hide my calendar, close my eyes, and imagine an undisturbed millennium in front of my text editor ... during which I may address some nonsense problem with malformed utf-7 in mime headers.

... during which I can complete a long and detailed email about process enhancements in open source.

... during which I can write a lengthy blog post about my productivity-related neuroses.

I imagine that I can see all the way to the distant horizon at the end of time, and that there is nothing between me and it except dedicated, meditative concentration.

That is on a good day. On a bad day, trying to hide from this anxiety manifests itself in peculiar and not particularly healthy ways. For one thing, I avoid sleep. One way I can always extend the current block of time allocated to my current activity is by just staying awake a little longer. I know this is basically the wrong way to go about it. I know that it’s bad for me, and that it is almost immediately counterproductive. I know that ... but it’s almost 1AM and I’m still typing. If I weren’t still typing right now, instead of sleeping, this post would never get finished, because I’ve spent far too many evenings looking at the unfinished, incoherent draft of it and saying to myself, "Sure, I’d love to work on it, but I have a dentist’s appointment in six months and that is going to be super distracting; I might as well not get started".

This is the part of the article where I wow you with my life hack, right? Where I reveal the one weird trick that will make productivity gurus hate you? Where you won’t believe what happens next?

Believe it: the surprise here is that this is not a set-up for some choice productivity wisdom or a sales set-up for my new book. I have no idea how to solve this problem. The best I can do is that thing I said above about closing my eyes, pretending, and concentrating. Honestly, I have no idea even if anyone else suffers from this, or if it’s a unique neurosis. If a reader would be interested in letting me know about their own experiences, I might update this article to share some ideas, but for now it is mostly about sharing my own vulnerability and not about any particular solution.

I can share one lesson, though. The one thing that this peculiar anxiety has taught me is that productivity “rules” are not revealed divine truth. They are ideas, and those ideas have to be evaluated exclusively on the basis of their efficacy, which is to say, on the basis of how much stuff that you want to get done that they help you get done.

For now, what I’m trying to do is to un-clench the fearful, spasmodic fist in my mind that gripping the need to schedule everything into these small boxes and allocate only the time that I “need” to get something specific done.

Maybe the only way I am going to achieve anything of significance is with opaque, 8-hour slabs of time with no more specific goal than “write some words, maybe a blog post, maybe some fiction, who knows” and “do something work-related”. As someone constantly struggling to force my own fickle mind to accomplish any small part of my ridiculously ambitions creative agenda, it’s really hard to relax and let go of anything which might help, which might get me a little further a little faster.

Maybe I should be trying to schedule my time into tiny little blocks. Maybe I’m just doing it wrong somehow and I just need to be harder on myself, madder at myself, and I really can get the blood out of this particular stone.

Maybe it doesn’t matter all that much how I schedule my own time because there’s always some upcoming distraction that I can’t control, and I just need to get better at meditating and somehow putting them out of my mind without really changing what goes on my calendar.

Maybe this is just as productive as I get, and I’ll still be fighting this particular fight with myself when I’m 80.

Regardless, I think it’s time to let go of that fear and try something a little different.